It is not very easy to receive feedback from potential customers if you are just a small startup. I believe it is much easier for a large company - you may spend money on marketing research. You may communicate with customers you already have that purchase other yet similar products or services. But when you are a fresh startup, there is no client base and no money either. You face the task of trying to get the maximum possible result from communicating with those who can potentially become your customers and adjust the way of your development if the demand in any way does not fit the supply. In other words, you must find out what you should fix and offer to people to make them most interested in you.

- I will tell you about our experiments relying on the example of my own.

I ask those readers who already know what the company OOO "Program Verification Systems" does to excuse me and skip the following paragraph. But I have to repeat this for those who do not know about our startup.

The company OOO "Program Verification Systems" develops a specialized package PVS-Studio to detect contemporary types of errors in C/C++ programs. To be more exact, these are 64-bit and parallel errors. Detection of defects is based on the method of static analysis of application source code and generation of warnings for those code fragments where an error is highly probable. I think you will agree that this product is not a mass one and therefore there are not too many responses to it. So it is extremely crucial to gather these responses as many as possible because you might easily miss something very important.

We have never considered the idea of e-mail spam as a serious way to attract attention or as a serious attempt to establish communication. But we tried for some time to work individually with people who, from our point of view, could get interested in our developments. We used social networks, for example LinkedIn and MoyKrug (RU), to search for such people. We wrote personalized messages taking into account their interests and activity area. You know, it is very laborious and slow work. Much time is spent on searching for appropriate people, additional elimination among them, search for contacts if they are not given on the account page. Adaptation of the letter text for this person also takes much time. During a day, one worker can send not more than 10-20 such targeted e-mail letters or messages in a social network.

The result of such work is null, or rather even negative because of too much wasted time. There is almost no feedback. People treat such letters and messages very negatively and automatically place them in the spam folder. The fingers mechanically click "delete" quicker than the eyes and brain can make out that the letter is written for this very person and concerns the sphere of his or her activity. Only few responded that decided to read the letter for some reason. But I have to say it once again: the number of messages deleted "automatically" is ten times higher. As an example, I recall a one-line reply of the kind: "Don't spend me spam anymore, otherwise I'll complain to your hoster". You see what answer to a personal introductory letter where we asked questions about a program library this person was developing and issues of using 64 bits in it? There was no advertising! Well, as in that joke, "Chukchi is not reader, Chuckchi is writer". This is a dead end.

Do not trust books where they tell you to personalize e-mail letters. Perhaps it worked 10 years ago. But not nowadays. However bad it sounds, if you want to write a letter, you'd better send spam. There will be no result either but you will spend much less effort at least. But the best way is not to consider e-mail letters serious at all.

Ok, e-mail letters are associated with spam right away. What about paper letters? What if you write, for example, to game developers asking them to come to you and read articles and try the product when their games need 64 bits and parallelism? What if you write a letter with a cooperation offer to people from the scientific community chosen from lists of various scientific conferences on parallelism? What if, along with letters, you send disks with articles to serious people who work in similar spheres asking them for response? What if you ask outsourcer companies if they are planning to develop 64-bit projects and if yes, invite them to your site? And so on, and so forth.

We made several lists and variants of letters in various scopes and started sending a lot of paper letters. A personalized paper spam, so to say. 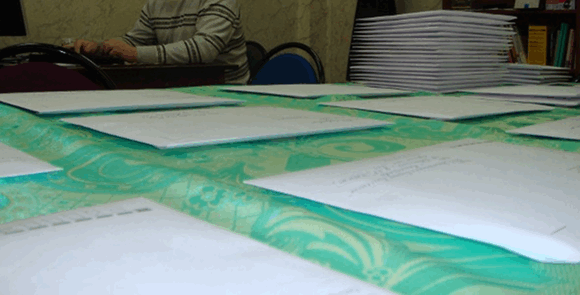 What's the result? No way better than in case of e-mail letters. As we found out, the probability that a paper letter will reach the right address is rather low and is not higher than 50%. 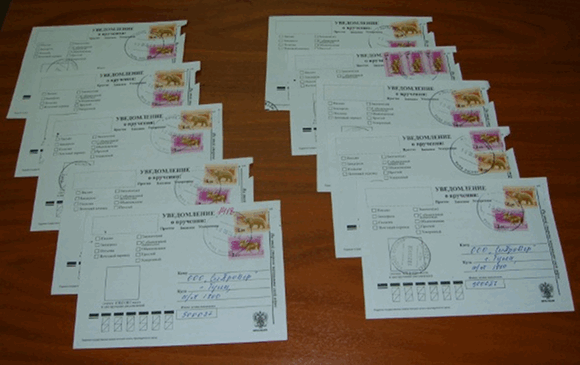 Figure 2- Experimental mailing of letters with return receipts. Right ten letters are delivered out of twenty

As an example, I can show you a letter that failed to reach the magazine DDJ. It seems to be a serious magazine working in a relevant topic, but how hard it is to reach out to it... 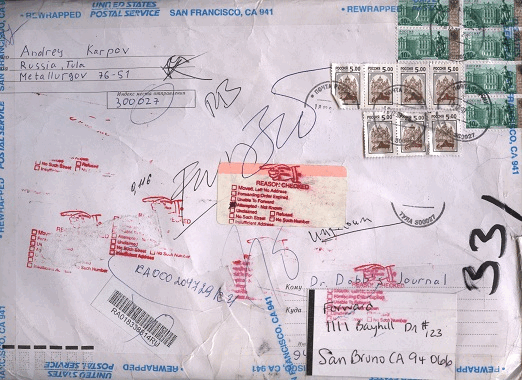 Figure 3- "The Letter, or There and Back again" (the letter that failed to reach DDJ)

But even those letters that did reach the addressees did not rouse the expected reaction. To be more exact, they roused almost no reaction at all. Perhaps companies have a filter in the form of a secretary, boss' bad mood, etc.

The conclusion is - establishment of communication with the help of paper letters is ineffective in the same way as with e-mail letters. The cost is also almost the same. In case of paper letters, it is easier to prepare them since they are not so much personalized, but sending of letters involves some costs: on paper, toner, envelopes, stamps and establishing good relations with the post office.

So, our search for a direct contact appeared unsuccessful. One more way is phone calls, but it is also rather laborious and we did not like this process personally. I cannot say that we tried this way very seriously but we have also experienced this variant and found it inefficient relying on our impressions. That is, I think that people who call on the eve of the New Year and offer Christmas-tree and office decorations might well find their customers. A secretary, who is bored sitting in the office waiting for the holidays, might get very enthusiastic about purchasing Christmas-tree balls. But it is ten times harder in case of phone calls concerning "static code analysis". I believe, no one offers synchrophasotron by phone either :)

Let us go further. We could intentionally prevent users from downloading even the demo version of the product until they provide us with the necessary information about themselves and persons we could directly speak to. Some companies engaged into this sphere do act this way, for example, Coverity. The prices of their products are unknown. Stern managers are serious only with serious customers. They simply do not mark unserious ones. You may try yourself and ask for a demo version filling in the inquiry form. It is 99% that you will not be answered at all. I myself and other people checked this. :)

We cannot afford such an approach in our company. Of course, we can hide the demo version. But our company is too small for this approach. Well, strictly speaking, it is not even the size of our company - we simply have no experience in this sphere and therefore must not try to do what we cannot.

Ok, we cannot contact those who can only potentially become users of PVS-Studio. Perhaps they are really not interested in it. Then we decided to try to get some feedback from those who have already installed PVS-Studio. At first we offered those users to fill in a brief inquiry form when downloading the tool where they were to specify their e-mails. Unfortunately, many people filled in the form like this:

There were also correctly filled forms but the programmers often answered that they had not yet tried the tool or would try it later. So, the idea of asking users to input their data did not prove its value and we refused to use the inquiry form.

We also tried to learn users' opinions when they were starting uninstallation of our tool. A user saw a page with a brief inquiry form where we asked to specify why the tool had not appeared interesting for this user. Unfortunately, most people closed the page right away without answering the questions. As far as I remember, nobody answered or there were not more than one or two persons. Thus, we also refused the idea of using inquiry forms when downloading/uninstalling the program.

We stopped for some time with our task, but an idea has occurred to us recently that we have implemented in PVS-Studio 3.53. This is our new experiment and we cannot know yet if it will provide more communication for us. Now any user, when studying PVS-Studio, can ask our company for advice on those diagnostic messages that the user can see. Therefore, we may get involved in an interesting conversation while answering this user's question and therefore learn about the interests of our potential users.

The mechanism works in the following way. After the analysis, you may highlight a message you find the most interesting and select the menu option "What is it?". A text of a letter will be generated that you may send to us by e-mail to get advice on the error you have chosen. A small fragment of code that contains the dangerous construct is added into the letter text. Of course, this information might be not enough for a good answer, but there will be a chance for a conversation to start and this is the main point. 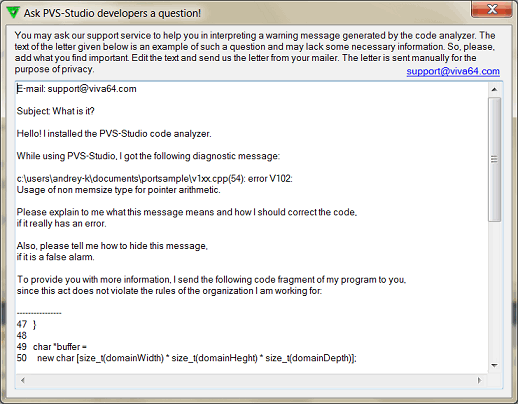 The user can copy the text and send the letter from his or her mailer. We refused to implement automatic sending due to privacy reasons. The program does nothing without user control.

Those who are interested may download the PVS-Studio demo version. I will also be very glad to know your opinion about the described option and ways to improve it. I would appreciate any other ideas about how to get more communication with potential customers.

We find the described idea the most successful for the moment. We are a bit afraid that some users might start sending too many letters. But it is not clear yet. If the experiment goes well, we will think how to improve this functionality. If someone finds this post interesting, I will tell you about the results in future.

The popularity of PVS-Studio free version is gradually growing, so more and more people are contacting to us for support.Most ...

Today is an important day - after 28 releases of the sixth version we present our PVS-Studio 7.00, in which ...

The PVS-Studio team is now actively developing a static analyzer for C# code. The first version is expected by the ...