We are often asked the question how one can add one's own diagnostic rule into our static analyzer PVS-Studio. And we always answer that it is very simple: "You just need to write us a letter with your request and we will add this rule into the analyzer". This interface of adding new rules is convenient to users. This is the best and most convenient interface actually. It's not so easy to do it on your own as it may seem. In this post, I will show you the bottom of the iceberg implied in the words "we have added this simple rule". 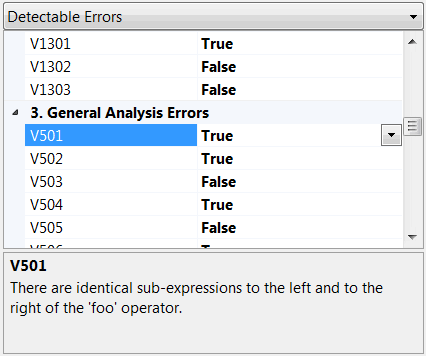 OK, let's be honest. PVS-Studio doesn't have a mechanism to enable users to write their own rules. This is, first of all, an architectural restriction. Some users may get upset because of it. But actually such people don't understand what they want because the mechanism of adding a new rule is rather complicated in practice.

For instance, there is rule V536: Be advised that the utilized constant value is represented by an octal form. It is intended for detecting errors like the following one found in Miranda IM:

Value 037 is written here instead of 37 just for the sake of alignment, although it is really number 31 in decimal form because 037 is an octal number according to the C++ rules. The error is rather simple for diagnosis, isn't it? Indeed: search for a constant, check if it begins with 0 and generate a diagnostic message. This diagnostic rule can be implemented in an hour. And a static analyzer's user (a skilled programmer but novice regarding development of such tools) is theoretically ready to make this rule himself/herself.

But he/she will fail, or rather he/she will succeed but the result won't satisfy him/her because of too many false reports.

We (PVS-Studio's developers) do it in the following way. Before starting to implement a rule, we at first write unit-tests for it where we add special marks for those lines that should trigger the rule and leave those lines that shouldn't. Then we write the first version of the code for diagnostics. As this new rule passes successfully all the unit-tests written particularly for it, we run full unit-tests to make sure that the new rule hasn't broken anything. The full unit-tests are run for several tens of minutes. Surely, you rarely manage "not to break anything" at the first time, so iterations are run again and again until the unit-tests are passed completely.

The unit-tests are followed by the next step when we run the rule on real projects. We have about 70 projects in our test base (for 2011); these are famous and not very famous open source projects we test our analyzer on. We have a self-made launcher that opens projects in Visual Studio, launches the analyzer, saves the log, compares it to the master copy and shows the differences (messages disappeared, messages added and messages changed). One cycle of running all the projects for Visual Studio 2005 takes 4 hours on a computer with four cores and 8 Gbytes of memory, the analysis process being parallelized. Judging by the analysis results we can see how well the new rule is integrated. Usually we start to study the differences without waiting for analysis to complete because sometimes it's clear if something has gone wrong. But we may stop running tests even if everything works well and nothing is broken. It happens when there are too many false reports. If we see that a diagnostic rule is triggered too often, we make exceptions from this rule.

Let's return to the search of incorrect octal numbers, the V536 rule. It has quite a number of exceptions. These are the situations when the warning is not generated:

Sometimes you cannot predict what exceptions there will be before running the rule on real projects. That's why the iteration "making an exception - running tests - analyzing results" may be repeated many times.

Why is it so important to run all those tiresome tests? Is it only because of false reports? No, it's not only because of them. The point is that you can't take account of all the possible types of constructs while making a rule and write it so that it works correctly and moreover doesn't cause the analyzer to crash. This is what we need all those numerous tests for!

What strange constructs do we mean? Here you are a couple of examples.

Do you know that you may define a variable, for instance, in a way like this:

Even if you do not use such constructs in code yourself, there can be some in libraries you use.

Finally, having passed all the tests, we may start working on documentation. For each diagnostic rule we write a help entry in Russian and English. Translation to English also takes some time. Now that the code is debugged, the tests are passed and documentation is written, the rule appears in the next release of PVS-Studio.

So, the development cycle of a new diagnostic rule can be briefly represented as follows:

The total time of implementing one rule is several days. Usually it is from 2 to 5 days. Naturally, we have enough experience now and can predict what exceptions from a rule we may need and implement them right away. We also manage to reduce the number of test runs. But anyway, the key idea is that only running tests you can formulate the exceptions and eliminate most of the false reports.

Now let's return to the question of how users can add rules themselves. As you can see, there are two reasons why it's difficult to do: they don't have enough skill to make out good exceptions and a good test base to run the rule on it.

Well, users will ask, won't we be enabled to create our rules in PVS-Studio some day? Some day we will manage to implement this mechanism and not to lose in comparison matrixes :-). But for now, all who want to create a new rule will receive a link to this post with the words: "We have the best interface for adding user rules - just write us a letter!"

As a PVS-Studio's developer, I am often asked to implement various new diagnostics in our tool. Many of these requests are based on users' experience of working with dynamic code analyzers, for example Valgrind. Unfortunately, it is usually impossible or hardly possible for us to implement such diagnostics. In this article, I'm going to explain briefly why static code analyzers ...

I develop the PVS-Studio static code analyzer intended for analyzing C/C++ software. After we implemented general analysis in PVS-Studio 4.00, we received a lot of responses, both positive and negative. By the way, you are welcome to download a new version of PVS-Studio where we have fixed a lot of errors and defects thanks to users who told us about ...