In this article, I'm going to tell you about a check of the MatrixSSL project done with the static analyzers for C/C++ code PVS-Studio and Cppcheck. 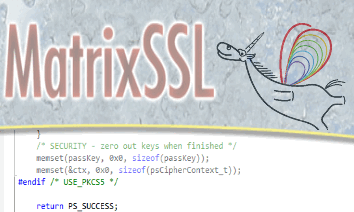 The article is written by Pavel Pimenov, the author of the open peer-to-peer client FlylinkDC++. The article is published in our blog by his permission.

What I liked about the MatrixSSL project was that it came with the MS Visual Studio 2010 version available "out-of-the-box".

You know, in order to be able to build openSSL from source files for Visual C++, you usually have to dance around with a shaman's drum for a while :). That's why many Windows developers use ready binary openSSL builds such as Win32 OpenSSL Installation Project.

MatrixSSL is an alternative library of cryptographic algorithms distributed under the GNU license (commercial support is also available).

The source code of the open-source version can be downloaded from the official site. We analyzed the current version 3.7.1 (matrixssl-3-7-1-open.tgz).

The code of all the three functions is alright and only the used part of the array is cleared, but the analyzer warns that the size of the requested buffer - 128 bytes - is probably too large.

I think it's OK here but still it's better to clear either 64 or 128 bytes just for the code to look neat. You can write it, for example, like this:

V597 The compiler could delete the 'memset' function call, which is used to flush 'tmp' buffer. The RtlSecureZeroMemory() function should be used to erase the private data. aes.c 1139

The optimizer throws away the call of the standard memset() function. I guess it may be critical for a crypto library and is a potential break.

V676 It is incorrect to compare the variable of BOOL type with TRUE. Correct expression is: 'QueryPerformanceFrequency(& hiresFreq) == FALSE'. osdep.c 52, 55

There's an obvious error here: The condition will never be fulfilled because sessionld is declared as an array of 32 bytes and can't have a NULL address. This error is not critical of course and could probably be viewed just as an excessive pointless check.

which is equivalent to one FILE_SHARE_READ.

V814 Decreased performance. The 'strlen' function was called multiple times inside the body of a loop. x509.c 226

In this code, inside the while() loop, the analyzer detected a call of the strlen() function for a parameter which doesn't change. Generally it is not optimal but in this particular case since the strlen() function receives a constant known at the compilation stage, the optimizer in the /O2 mode will remove the function call completely and substitute it with the constant's value calculated at the compilation stage.

This analyzer generated fewer warnings but there were some among them which PVS-Studio had failed to diagnose.

None of them affect the library's work as they all refer to unit-tests in crypto\test.

"Finishing return-shot in the head"

Consecutive return, break, continue, goto or throw statements are unnecessary. The second statement can never be executed, and so should be removed.

This is a copy-paste error. There are two identical lines at the end: return PS_SUCCESS;.

Another typo of this kind can be found in the function psSha384Test(void).

This issue is non-critical in this case but it's nice to see that Cppcheck can catch it. The code is inside files and looks as follows (copy-paste):

Resources are better to be requested right before they are really necessary. If you look at the code in those files, you will see that the table is not used at all, that is, the call of the malloc() function as well as the call of the free(table) function at the end are just excessive.

I am a FlylinkDC++ developer and I've been using the PVS-Studio analyzer granted to us as an open-source project for more than two years now. The analyzer more than once helped us find various bugs both in our own code and third-party libraries' code. Thanks to regular checks, FlylinkDC++'s code has become much more stable and safe. And that's wonderful!