Sometimes we experiment with the PVS-Studio analyzer's trial mode to make it as efficient as possible for users to get started with. Recently, we again have changed the format of the trial version. This note is intended to answer every possible question developers may want to ask when starting to work with our tool. This article is in fact the answer to the question, "can I try the demo version and what limitations does it have?"

Before discussing the new trial model, I'd like to remind you what it used to be before and why we weren't happy with it. Then you will understand the reasons for the current changes.

How it used to be before

From the viewpoint of functionality, the demo version was in no way different from the full one. The only limitation was for the "number of clicks" (the previous demo mode is described in the article of 2012).

The user had a limited number of clicks on the diagnostic messages to quickly jump to the associated code fragments: 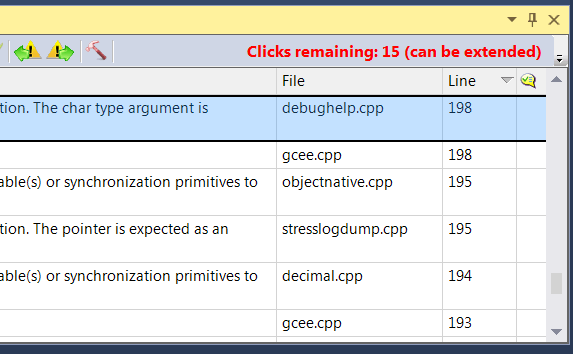 Every time the user clicked on the message, the counter would decrement. You could, of course, open the file and navigate through it manually; it didn't affect the clicks counter. But I guess everyone understands how painfully slow and inconvenient that was. And after all, a static analyzer is designed to save development time, not extend it. If the user feels ready to waste time on manual navigation, we wouldn't sell them our tool anyway.

At first, the user would have 100 clicks. Then they were offered to fill in a form to send us their information and contacts and then we would provide them with additional 100 clicks.

As a result, we got extremely few emails and therefore we decided to change the ratio. We would provide 20 clicks for a start and 200 more for filling in the form. Unfortunately, that didn't help. Instead of "extremely few" emails, we were getting "just few".

As we believe, the limited number of clicks scares people off the tool and they give it up quickly - especially when there are only 20 clicks available in the beginning. The user would start feeling greedy and just scan through the list, not jumping to any particular code fragments. Moreover, some would think there are total 20 clicks available, and that made them feel sad.

However, all of that is just nothing in comparison with the second issue. We figured it out when watching how people behaved when installing and getting started with our analyzer.

To put it brief, programmers are too "impish". They start interfering with what they shouldn't and changing the tool's settings and work modes. Sure, programmers are curious creatures, otherwise they wouldn't be programmers. But that may totally spoil the intended usage scenario when one is only getting started with our tool.

The main trouble is that they tend to set all the parameters "at maximum". It's actually the first thing they do. They enable the 3-rd level warnings and 64-bit diagnostics disabled by default. They think it gives more control over the analyzer and enables them to estimate its capabilities more accurately.

It doesn't mean that the 3-rd level or 64-bit diagnostics are not necessary. Some of our customers use them extensively and feel thankful to us. But working with these diagnostics, one has to select only the most relevant and crucial warnings.

If the user has "turned everything on", we can stop counting on them as our potential customer from that moment on because what they get is meaningless noise instead of useful warnings and that will make them frustrated. We have watched this happen numbers of times. They would enable all the diagnostics and settings and lose interest after scanning through 30 non-relevant messages. That's all. Another potentially positive relationship failed.

It's not programmers who are to blame of course - it's the demo version of the tool that failed to show its best. And we had to do something about it.

By the way, it's not only us who are embarrassed by the situation. The article "A Few Billion Lines of Code Later: Using Static Analysis to Find Bugs in the Real World" communicates the following idea:

The initial reports matter inordinately; if the first N reports are false positives (N = 3?), people tend to utter variants on "This tool sucks."

So you can see now how enabling just one wrong thing may spoil everything. With an approach like that, you will see the first useful message not sooner than at the 50-th (at best) message on the list. Again, it doesn't mean that many of the diagnostics are useless - they are sure necessary in certain projects, otherwise we wouldn't have implemented them. But they are not for everyone.

What we decided to change

For a start, we decided to hide the clicks counter so that it doesn't confuse people. We thought we should let them feel free when examining diagnostic messages, without constantly minding the decrementing counter. The counter will show up after the user has sent their information to us.

In the demo version, we have strictly disabled the 2-nd and 3-rd levels for all the diagnostics. You can't get them back.

Sure, it's an arguable solution. But we feel like trying this option. We need to show to the user that they do have bugs in their code! To do that, we need to make them work with the critical 1-st level warnings instead of minor stuff.

We believe that it will grant our tool more chances to attract people. And if they do like it, they won't have any troubles afterwards to carefully handle all the diagnostics and customize the analyzer's settings. The most important thing is to find and point out real bugs in their code right from the start.

Summing it up: a new trial model

You can download PVS-Studio from here. The demo version has the following limitations:

You may find the demo version's limitations severe. But, trust me, they'll benefit both us and you.

Viewing only the 1-st level warnings guarantees that the user won't miss real bugs. It's a very important point. We need to show errors in the code right away. It will help both us and our potential users.

The little number of clicks and analysis limitation within the first level will trigger a quicker launch of communication via e-mail. If someone wishes to check other messages, we can grant them a registration key for, say, 1 week. The person only has to write us an email.

It's very important for us to get emails and start communicating with the user, for we can often help with some difficulties you may have when working with the analyzer. We help people set up some options, get rid of false positives, clarify on the analyzer's messages, etc. Very often, we manage to turn one's negative impression into a positive one and get the person to become our customer. We usually just need to help them with some trifle option - and to do this miracle, we need to communicate.

Welcome to try the PVS-Studio demo version. And please do write to us. We will help you to handle any difficulties and find your way around the settings, and grant you a registration key to let you study the tool thoroughly. Just please do not keep silent!

By supporting communication, we'll be able to make the PVS-Studio analyzer better, fix lots of errors in your code, and stand on guard of its quality! Contact us: support@viva64.com

What is the reason for making PVS-Studio 4.00 a commercial solution? :-(

Unfortunately, we must make the PVS-Studio 4.00 static analyzer completely paid. We intended to make only the set of 64-bit rules paid while keeping the general analysis and OpenMP-software analysis free. But the world is stern and we've found no support.

Starting with the version 6.27, the PVS-Studio static code analyzer can classify its warnings according to MISRA C and MISRA ...

The long wait is finally over. We have released a static code analyzer PVS-Studio 6.00 that supports the analysis of ...