PVS-Studio is a program that looks for bugs in the source code of C++ and C# projects that can't be seen by the compiler yet are almost sure to be programming mistakes.

Note. This article was originally published in Russian on the blog.harrix.org blog. The original and translated versions were posted on our website with the permission of the author.

I was contacted by the guys from the PVS-Studio team with a collaboration proposal. I have read a lot about their product on Habrahabr pages but never tried it. So, I suggested the following: they would give me a product license, and I would scan my programs and write a review of the tool, where I'd discuss how I was using the analyzer, how the codes were checked, and so on. They said yes.

So, what you are going to see in this article is, as it's trendy to call nowadays, an honest review without any embroidery by an ordinary, average programmer who deals with "academic" programming rather than application programming. In other words, I'm no guru from some large company working on complex projects who knows his way around tons of utilities and is good at compiler optimizations, and all that.

Another thing you should know is that I was a devoted functional-programming fan just a few years ago. I didn't favor OOP, never used namespaces, reinvented the wheel lots of times, and so on. Now I'm recalling that period of my life as nightmarish and actively rewrite many of my programs of those times, though they are not ready for static analysis yet. For that reason, l will take the projects from my functional-programming past (they all can be found on GitHub) for analysis. Although functionalism reigns there, I was very careful about coding, testing, and documenting when writing them, so I don't think there should be many serious bugs in those projects.

Installation didn't cause any problems. There is a large button "Download and try" on the home page of the PVS-Studio site, which takes you to a page with a download link that you won't miss. 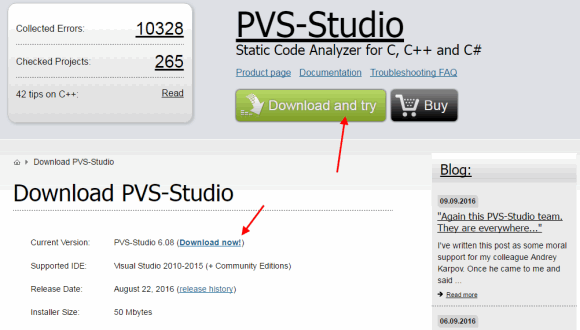 Installation is totally standard; there are even no special options to choose from. In my articles, however, I always try to describe even the simplest steps. So, here you are the screenshots: 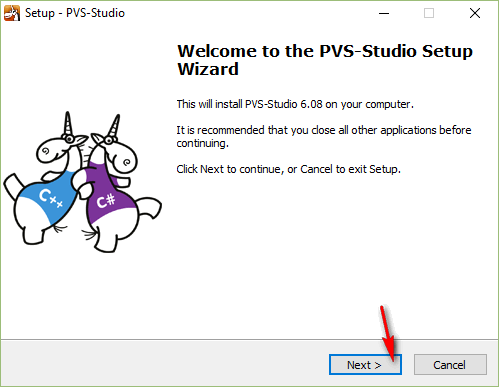 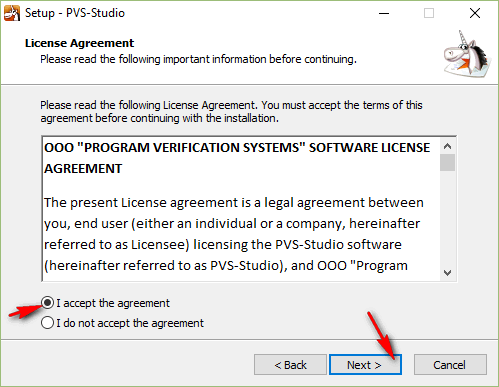 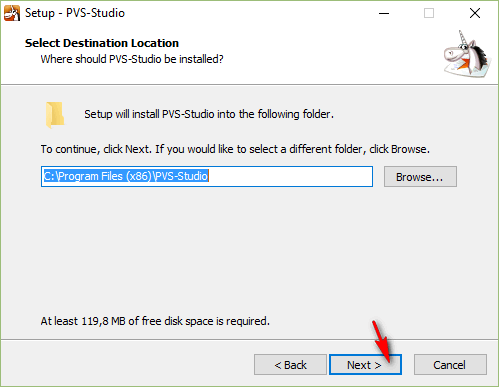 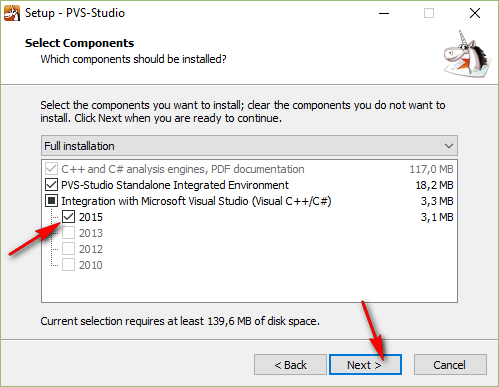 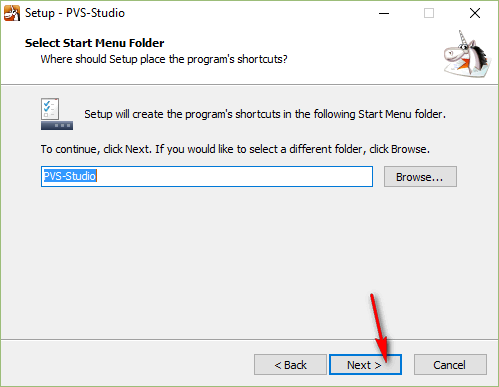 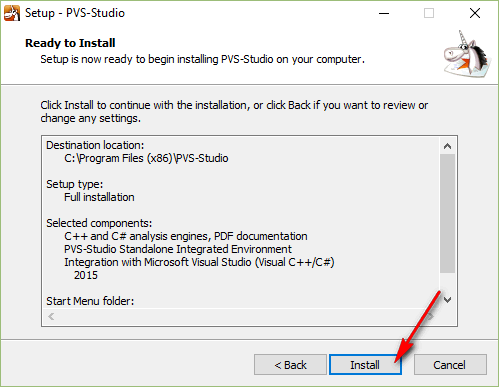 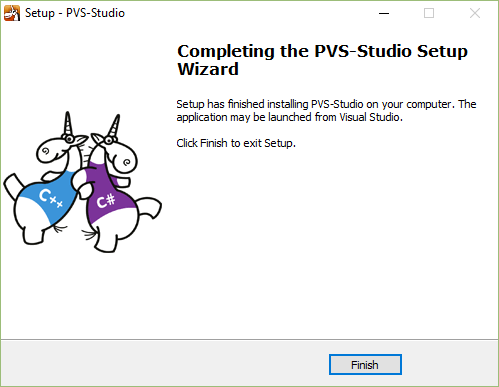 How it all failed

I'm saying right away that I didn't read any documentation at first. I just installed the program and thought, "so what's next?" I found the following new items in the 'Start' menu: 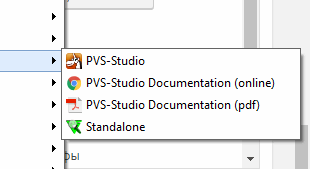 Intuition told me that the item I needed should have the same name as the program. Click. And here it failed me and showed this message:

Honestly, I grew worried quite a bit. You see, I mostly work in Qt and keep Visual Studio rather as a tutorial program for my students.

OK. Perhaps I should try another menu-item, Standalone? 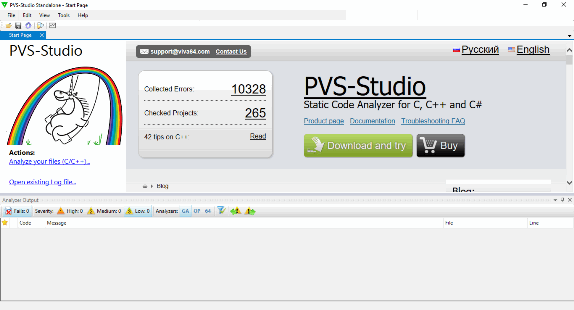 That's better. Now, an important side note. What I expected to be the algorithm of working with the analyzer is this: I open it, load my project's source files, and it finds bugs for me. This assumption turned out to be completely wrong, but we'll talk about that later.

So, at first I tried to load one of my files (I was worried by the fact that it allowed me to select only one file at a time). 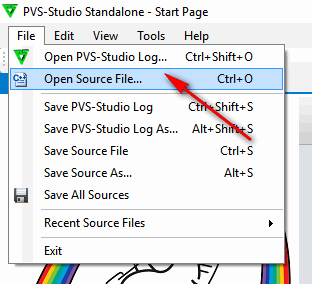 Here it is, but what's next? No more large or colorful buttons. 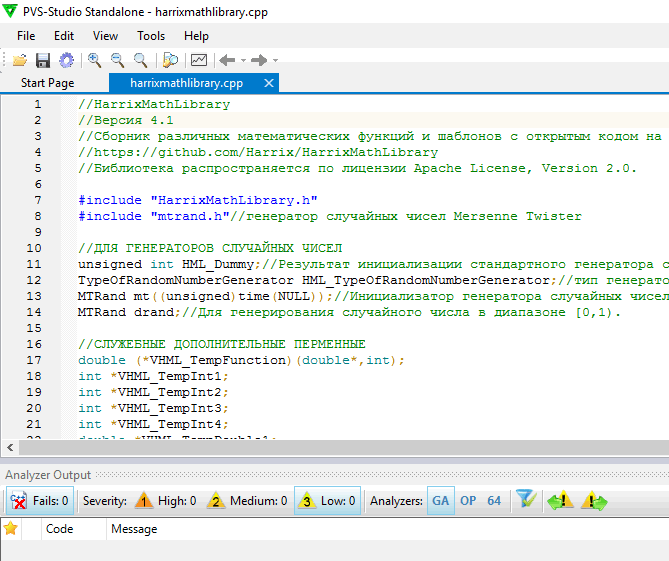 There is only one item in the main menu that looks like what I need: 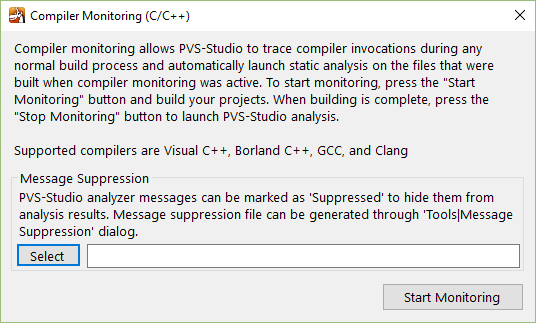 Clicking on it opens the following window.

And here's where I acted silly. Instead of reading the text, I started clicking around on the buttons. When I clicked on Select, the program asked for some *.suppress files, which was obviously not what I needed. The word Compiler caught my eye. OK, so I should click on Start Monitoring.

I thought that the program was scanning my computer for compilers, so it should take quite a while. And it really did (I waited for several hours), but I was happy to see that it started to find something at last:

It was only some time later that I figured out the reason: I'd been working with my projects and compiling them while the monitoring process was running.

A couple of hours later, I felt the tool had found enough compilers and stopped it. However, it didn't output any results. What do I do then? Damn, now I've got to read the documentation (

The relevant link turned out to be not quite noticeable. 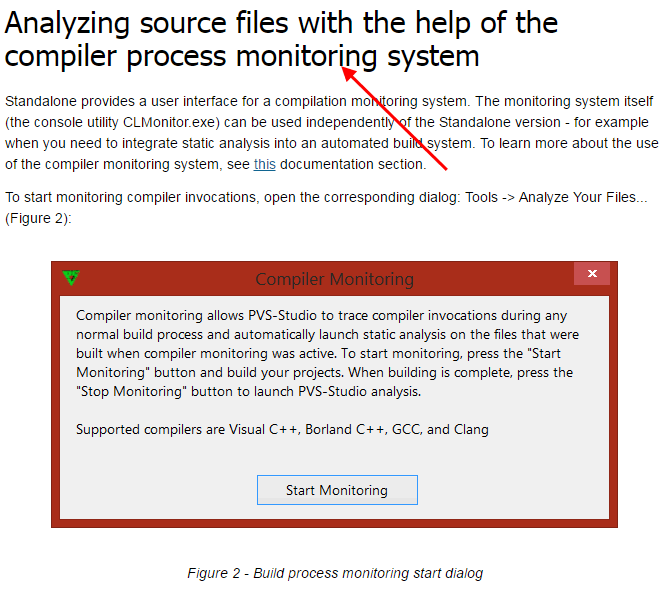 After reading the article, I finally figured out what to do.

How it all worked out

This is how the analyzer actually works.

I'll show you how it works using the test application Qt 5.7 with MinGW, which makes use of my Harrix MathLibrary library, as an example.

Go to the analysis menu. 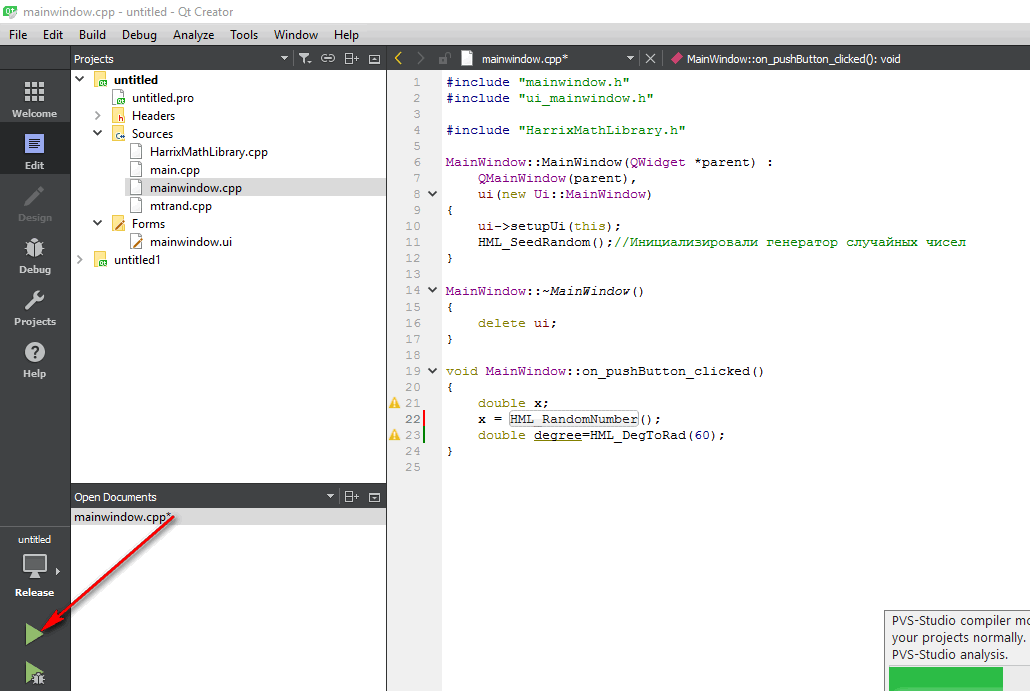 The monitoring process can run in background.

PVS-Studio has detected a launched instance of our compiler. 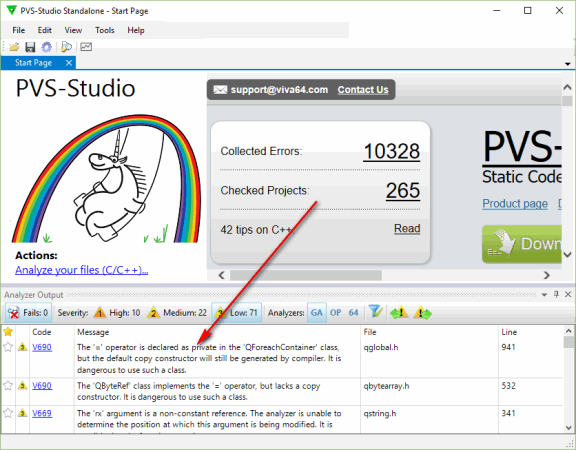 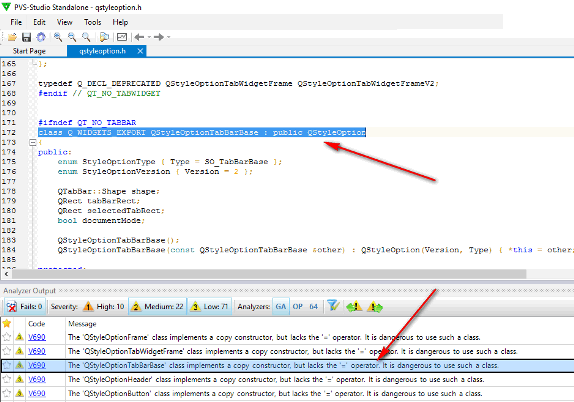 And here PVS-Studio poured a pile of warnings. Damn. I'd hoped for better results (( 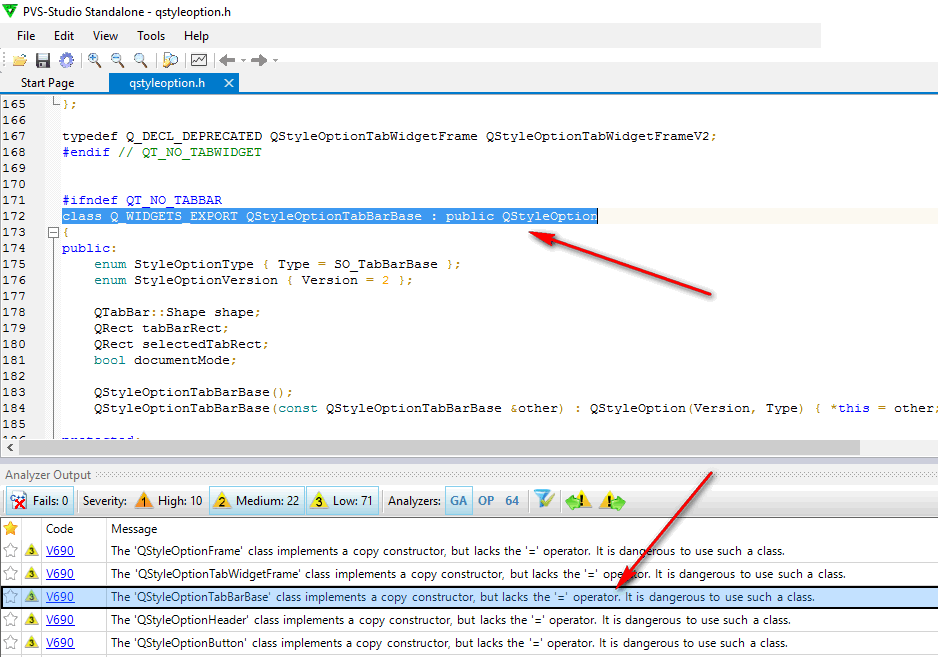 Double click on a warning takes you to the corresponding source file where the bug was found.

When you finally grasp the idea behind the program, working with it becomes easy, but it's not quite intuitive for a beginner.

Now let's see what bugs we've got. Are they really bugs at all?

Warning. When starting the compiler, rebuild the whole project. Just recently I was sad about 71 warnings, but after I fixed them and rebuilt the project, the tool issued over 1900 more warnings.

We have walked the path of my ascension to understanding how to use the program. Now let's take a look at the analysis results.

I'm not much interested in the bugs found in Qt itself - they are the responsibility of those who developed the compiler.

What about my own mistakes?

V550. An odd precise comparison. It's probably better to use a comparison with defined precision: fabs(A - B) < Epsilon or fabs(A - B) > Epsilon

And I do agree with that warning in most cases. For example, the following code with (F[i]==F[i+1]) might cause problems:

An even worse idea is to check the extreme positions of a Maxwell's wheel like it is done in the following dreadful code:

And here's what I got on the following fragment.

V656 Variables 'xn', 'yn' are initialized through the call to the same function. It's probably an error or un-optimized code. Consider inspecting the 'HML_Mean(x, VHML_N)' expression. Check lines: 3712, 3713. harrixmathlibrary.h 3713

It's a quite disappointing error. I must have copied a code fragment but forgot to change some of the tokens.

V523 The 'then' statement is equivalent to the 'else' statement. harrixmathlibrary.h 695

This function will always give a positive answer about an existing solution. I have never figured out what made me break all the computations of the solutionis variable at the end of the function.

The next warning deals with me being overcautious rather than a real error: I set the summary variable to zero first, just in case:

PVS-Studio also found two identical functions in my code (I didn't favor std back then). Besides those two, it also found a few more, which is highly useful when you have a large project with lots of functions and can't recall if you have already used this or that function or not.

And here's a classic error dealing with a missing type conversion.

As for this code, the analyzer issued a false warning, as HML_ProportionalSelectionV2 returns a random value:

V656 Variables 'NumberOfParent1', 'NumberOfParent2' are initialized through the call to the same function. It's probably an error or un-optimized code. Check lines: 1106, 1107. harrixmathlibrary.cpp 1107

A number of issues were found in the Harrix QtLibrary library.

For example, it has a function for splitting a string into syllables. The tool gave a nice tip that I should merge the conditions.

V581 The conditional expressions of the 'if' operators situated alongside each other are identical. Check lines: 1140, 1147. harrixqtlibrary.cpp 1147

The loop in the following piece contains a Boolean variable, in, that will always be true.

V560 A part of conditional expression is always true: (in != true). harrixqtlibrary.cpp 2342

There are also fragments with duplicate code when filling models with items:

The final conclusion: this program is certainly a must-have. A very handy tool to manage your code's quality.

P.S. And I was hoping there would be no bugs (

Why I Dislike Synthetic Tests

I don't like it when people use artificial code examples to evaluate the diagnostic capabilities of static code analyzers. There ...

How PVS-Studio does the bug search: methods and technologies

PVS-Studio is a static code analyzer, that searches for errors and vulnerabilities in programs written in C, C++ and C#. ...