Some people wonder why our site is named Viva64, the product is called PVS-Studio, and the company's name is OOO "Program Verification Systems". It's really weird, so it's time to set things right. Renaming the company will be the first step. For sure, many people are interested in the question why there is such a variety of names. Short explanation: due to historical reasons. This article is a more detailed story of how it happened. 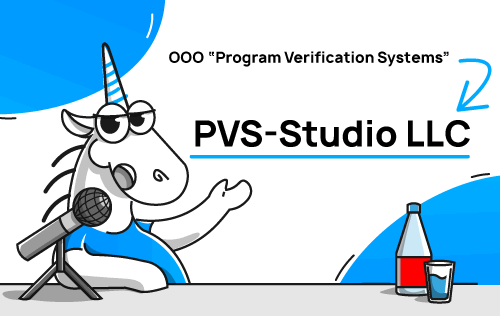 It all started in 2006 with the idea of creating a small code analyzer to search for 64-bit errors in C and C++ code. At that time, the migration of x86-64 applications was just beginning (everyone called it AMD64 back then).The idea of a startup to create an auxiliary tool seemed genius. There was no immediate success, but the product gradually began to sell and developed.

The tool was named "Viva64". This symbolized something in the spirit of "Long live the 64-bit world!". Logical enough, the site was named "Viva64.com". So in those days, it all was fair enough.

As time passed, the static analyzer has been actively developing. Eventually it has comprised not only 64-bit diagnostics. In 2009, the product was renamed to PVS-Studio, derived from the company's English name "Program Verification Systems". And the Viva64 analyzer has become just a set of 64-bit rules in this new product.

By the way, everything is complicated with the company name. The company is registered in Russia and according to the current rules, its name in English was OOO "Program Verification Systems". This is loan translation from the name of the legal form among commercial organizations. The presence of this OOO is terrible.

That's how it turned out:

Therefore, the time has come to change the company's name in Russian, and specifically write in the corporate charter how it will be called in English. Basically, we had to put the names in order.

We started by renaming the company. Now it's all very simple. The company name now matches the product name: PVS-Studio LLC.

The next step is to move the site to domains PVS-Studio.com and PVS-Studio.ru.

So that's the story. Thank you for your attention. Some day I will tell you the story of how our logo became a unicorn and what transformations took place with its image.